Painting Pixels is delighted to have worked with Aramar to produce this bespoke 2D animation to help showcase their service in a new marketing campaign.

Aramar provide a unique service to their clients; Financial Performance Management. Aramar’s goal is to take the headache away from Financial reports and management.

They wanted to promote and showcase their service in a new marketing campaign. However due to the nature and style of business service; its not the most visual service sector. But the requirement was to produce a new, more visually appealing and engaging approach to deliver and demonstrate their core service and showcase its benefits.

The team at Aramar were very forward moving and really did think outside the box. The new campaign wasn’t meant to be a direct and ‘in your face, advert (talking about what they do), but instead a more entertaining and fun approach with a key message running throughout.

So to deliver this message Painting Pixels along with Aramar helped to develop an idea of how the story could be told.

We decided on a fun lighthearted bespoke 2D animation. One that isn’t so salesy but instead is an entertaining and watchable cartoon.

We built the 2D animation idea around a simple concept. We introduced two characters; Dom and Jerry and the premise was that one would use Aramars finanacial planning tools and the other would do it the old fashioned more laborious way! Basically resulting is a worse quality of life with long hours and late nights at the office whereas the other character who uses the Aramars service, is done with the work in no time and goes off and enjoys life.

Go watch the animation above to see for yourself!

So after we created the story we then moved on to developing the 2 stars of the cartoon; Dom and Jerry. Dom got the short end of the stick as we created him to be the character that would do things the long way round and Jerry the efficient thinker who uses the Performance Management tool.

We create many doodle and concept art styles for the two characters. Once we settled on an art style we then went on to develop the characters further and created a bunch of poses and facial expressions for them. 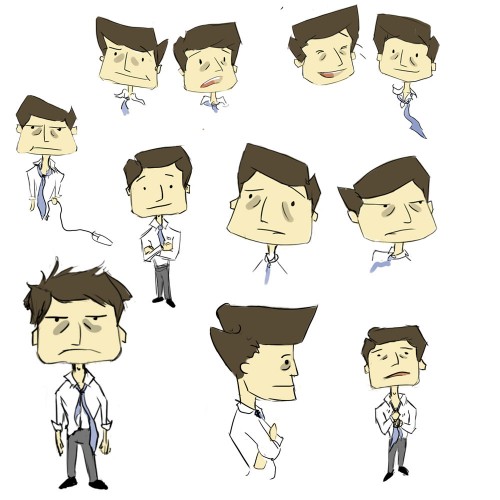 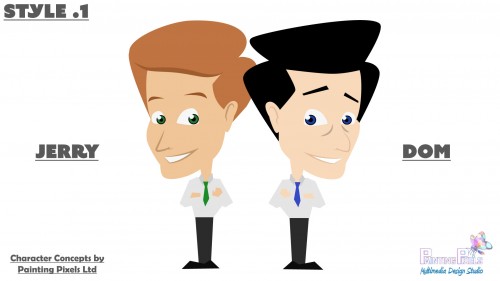 From the concepts we created the final visuals and assets to be used throughout the animation process. These designs were created and optimised specifically for video and animation use. Once we had the design of the characters developed the next stage was to combine them in with the story and develop visual storyboard. Within the storyboard we expressions the locations and environments, which we would then use as a reference in the set building stage and animation stage. 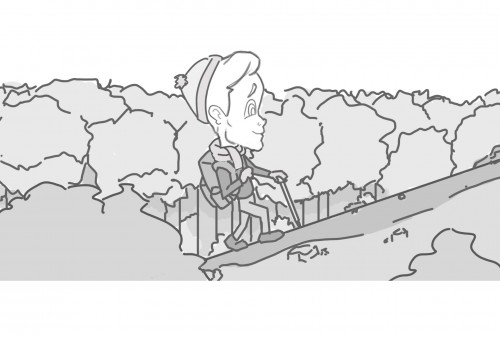 The next stage was to start full production and start with creation of all the illustrated assets. We carefully organize and layer up all graphics that will require animation and then take them in to our animation package where our talented artists painstakingly move and animate all components.

We then add any additional motion graphics before bringing it into our editing package. At this stage we create the final cut to the whole animation and throw away any animated clips that slow the flow or idea of the animation. We also then add in any necessary sound effects and music before creating a final HD export ready for use in marketing and to tell the story at tradeshows or on online websites. Our clients Aramar were delighted with the result of this bespoke 2D animation and our professional and enthusiastic approach to the animated project We thoroughly enjoyed this project and found it to be both challenging and fun in taking a service such as Financial Performance Management and developing that idea in to such an engaging and entertaining animation.

If you are looking to promote your company, products or services in a more entertain and informative manner then call Painting Pixels today on 01473 857860

Bespoke Website Design
Complete Dedication! We needed a new website for our Ipswich market and so approached Painting Pixels. We had seen their previous work and were very impressed. We did not have the biggest of budgets and so were unsure of the quality of website that we would get. Painting Pixels were very friendly and assured us that they would give us nothing less than a quality site and they were right. The website that we got is way better than we thought. The way it both looks and functions is perfect. We were constantly updated with the progress and knew that they were completely dedicated to producing a site that we would love. I would recommend them every time.