Painting Pixels are thrilled to have worked on another project with our America based client the Calorie Control Council. We produced a 2D animated production to showcase the benefits of using Sucralose

Sucralose is a very well known and widely used sweetener all around the world and is used in everyday food products like sweets and drinks. See the animation below to see for yourself.

The project involved a multitude of processes including the following

The bespoke 2D animation was created by our talented team of artist from the ground up. The project specification was limited, which was fine for us as it allowed for better flexibility and creativity. Our full spec was to create an informative and fun animation to showcase the benefits of Sucralose.

So we then did a ton of research and about sweeteners and sucralose and what it does and the science behind how it works.

With this knowledge we then started to construct the information together and created a script that was both educational but also explained the subject matter in an easy to understand way.

Once we had the script approved we then went on to develop visual concept ideas for the characters and environments. We played with many different design styles until we reached a style that was fun and bright and would help aid the script in delivering the message.

With a design style and approved script in hand. It was then possible to start on the visual storyboards. These are sets of doodles and sketches, which visually tell the story as written in the script. 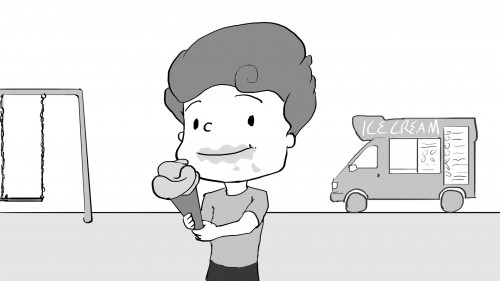 The next stage was to get the voiceover for the script recorded. We have a large talent base in the UK that we use for many projects including TV presenters and radio stars. However, we needed a very specific style of American accent that simply couldn’t be imitated. And so we went on a talent hunt in the USA to find that authentic accent from a professional voice over artist.

Using the voiceover and the storyboard graphics we created an animatic. This plays out the full animation as a rough cut and is a super important stage as it allows for the clients to see exactly how the story will animation will look and give them a better understanding of scale, timing and environment.

This process is a lifesaver as it helps to bolt down the entire story and animation before the full and expensive production side begins.

After the approval of the script, storyboard and animatic we then went on to create all the illustrated assets. We took those assets in to our animation and post production package and begun the animation process. This is a long process as we had multiple styles of animations to create including transitional and character animation.

Once all the individual animated pieces were created we then took it in to out editing suite and cut all the scenes together and rejected any components that didn’t work with the final flow of the story. We added in final bits of motion graphics and effects along with sounds effects and music.

Finally, we output the animation in full 1080p HD quality perfect for use in tradeshows and websites. If you haven’t already the scroll back up and view the animation.

We hope you enjoyed reading about our 2D animated production with our international client. If you have your own 2d, 3D or video production that you would like us to help you with then please give us a call on 01473 857860

Website and Video Production
It’s wonderful working with Painting Pixels and watching my projects come to life. They have worked side by side with us over many years and produced many design assets including, high-quality information leaflets, responsive website and many video productions, which our patients find very helpful. They are good listeners and have a very professional service. We will continue to use them for all future projects.