It may not be Christmas time just yet but pantomime preparations have already begun!

So with the start of a new month and only leaving a hand full of further months till launch; Painting Pixels begins work on this year’s big pantomime production. This year we are delighted to be working on another classic – Snow White! Starring MEL B as the scary queen.

So we better get reading before she unleashes her wrath!

Come on printer hurry up!

Coffee pot on! Let’s get started with this script! 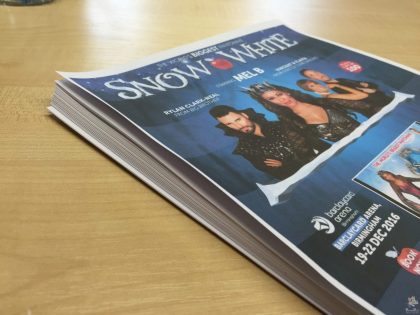 The Snow White pantomime production will feature at the Barclaycard Arena in Birmingham from the 19-22 December 2016 and The SSE Arena in Wembley 29-30 December 2016. Tickets are selling fast so be sure to book yours now! Worlds Biggest Panto

Take a look at the work we did last year on the Cinderella pantomime production, which featured eye-popping 3D stereoscopic animation.

Full Branding Package and Responsive Website
Painting Pixels developed our full branding package, which consisted of a new bespoke logo, responsive website and everything else in between including, letterheads, compliment slips, business cards and advertising leaflets. The designs where fresh and modern and gave us the appeal that we were going for. They listened to our requirements and delivered a high quality end product. We would recommend every time.